Haunted by God: The Life of Dorothy Day

Haunted by God is an acclaimed play about the co-founder of the Catholic Worker movement, Dorothy Day (1897-1980), who spent 47 years caring for the poor and leading the Catholic Church to a more active concern for the needy in U.S. society. The Catholic Worker became a living movement that has been responsible for feeding and housing the homeless; and today, there are over 200 Catholic Worker houses around the world. Pope Francis praised Day in a speech to the U.S. Congress, saying, “Her social activism, her passion for justice and for the cause of the oppressed, were inspired by the Gospel, her faith, and the example of the saints.”

This dramatic portrait, featuring Still Point Founder/Artistic Director Lisa Wagner-Carollo, follows Dorothy Day from her days as a 17 year-old Greenwich Village bohemian through her later years as a tireless champion of social justice. Haunted by God: The Life of Dorothy Day has been touring the U.S. since May of 1990, and has also been presented internationally at the Pax Christi International Conference in Assisi, Italy in 1995, and at the 1999 Parliament of World Religions in Cape Town, South Africa. 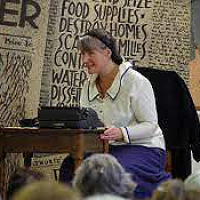 Lisa Wagner-Carollo is the Founder and Artistic Director of Still Point Theatre Collective. She founded the company in 1993, motivated by a strong desire to combine ministry and theatre. Ever since, she has toured the country and overseas with Haunted by God: The Life of Dorothy Day. Wagner has also performed in and produced (for Still Point), the internationally toured Points of Arrival: A Jean Donovan Journey, a play that explores the life and commitment of one of the four North American church women killed in El Salvador in 1980. Lisa also works as a facilitator in Still Point’s outreach programs. Her education includes a B.S.E. from Emporia State University. She completed her certification as a spiritual director at Siena Center in Racine, Wisconsin and has begun a spiritual direction practice in the Chicago area. Awards: Outstanding Recent Graduate, Emporia State University, 1997 Seeds of Hope Award, Wheatridge, 2009. Click here to view Lisa’s book, Above Along Inside and Through, published in 2017.

Register for EVENT ONLY