Connect with a Spiritual Director

Connect with a Spiritual Director

What is Spiritual Direction

The major premises that underlie spiritual direction are disarmingly simple: namely, that God is active in our lives, constantly taking the initiative; that God’s actions are unrelentingly loving that we can experience these actions of God, can sense the movements of God’s Spirit; and that we can respond to these movements either with willingness or with resistance.
Learn More

Program is on hold until the Center reopens

Cancer Prayer Support Group is an ecumenical Christian group for men and women who have or have survived cancer, and for their support persons. We begin by checking in with each other.
Meeting one Wednesday each month,
10:30 am – 12:00 noon.
Learn More 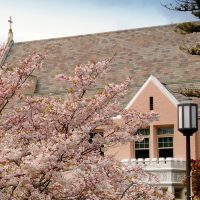 What is Spiritual Direction

“The major premises that underlie spiritual direction are disarmingly simple: namely, that God is active in our lives, constantly taking the initiative; that God’s actions are unrelentingly loving (which is not to say always easy or comforting but, rather, always on the side of our deepest desires); that we can experience these actions of God, can sense the movements of God’s Spirit; and that we can respond to these movements either with willingness or with resistance.

Spiritual direction at its best entirely focuses on helping the directee to become attentive to the presence, action, and movements of God in ordinary human experiences, and on noticing the directee’s own responses to these movements of the Holy. Whatever content the direction conversation may hold, however many interesting twists and turns and diverse paths it takes, the director listens for one thing only. The director “tunes in” like a person fiddling carefully with a radio dial, spinning from one music clip to another, one fragment of speech to the next, until “Aha, this is it!”: the director recognizes the presence of God in the conversation, and then helps the directee to explore further what has occurred or is occurring.”

Excerpted from Chapter 5 of Sacred is the Call (The Crossroad Publishing Company, 2005)

Cancer Prayer Support Group is an ecumenical Christian group for men and women who have or have survived cancer, and for their support persons. We begin by checking in with each other. New members are encouraged to tell the group about their cancer and its treatment. All feel free at any time to talk about feelings and changes in their medical state.

After check-in we read scripture, inspirational reflections, and pray together. The leader chooses scriptures which focus on healing and trusting in God. After shared reflections on the scriptures, we spend time in prayer, conclude with petitions and the Lord’s Prayer.

In general, we spend very little time talking about cancer itself and even less time talking about treatments. It is a prayer group, not the usual cancer group, and we are encouraged to seek spiritual as well as physical healing. Apart from the times we meet for sharing and prayer, we give additional support through phone calls, accompanying members to medical appointments and praying daily for each other.

There is no fee for this support group. Donations are gratefully accepted.

What Cancer Cannot Do

Cancer is so limited—

Jeanine Diaz de Rivera was diagnosed with breast cancer four years ago. “It was a bright sunny day when I left the hospital,” she said. “I didn’t cry when the doctor read the diagnosis. I knew I had a journey ahead, and I didn’t know what to expect. I knew I might end up dying. I didn’t think about that. I said to God, ‘You’ve got to hold my hand tight. I can get through this.'”

One positive factor for Jeanine was an early diagnosis. Another was the Mercy Center cancer prayer group she discovered. She read about the Center’s group in a book lying on a table at the Kaiser hospital waiting room. A faithful parishioner at Our Lady of Mercy in Daly City, Jeanine knew she wanted spiritual support, and the testimony she read in the book featuring a dozen portraits of Bay Area women with cancer gave her hope.

With 30,000 new cancer diagnoses in the Bay Area every year, many support groups exist, offering everything from Tai Chi to Line Dancing. Mercy Center’s group led by Liz Lawhead offers a deep experience of prayer. The group meets on Wednesday morning twice a month and welcomes people of all faiths and those struggling to find faith.

Jeanine is now a regular in the prayer group. People drift in on this day for the meeting. They talk in twos and threes about a treatment, a diagnosis. There are smiles and laughter.

The group began as a result of Mercy Sister Mary Celeste Rouleau’s diagnosis of lymphoma in 1994. Although she was near death, Reverend Charles Kaldahl, a Lutheran minister, sat and prayed with her. She survived, and together they began the ecumenical prayer group, which she continued to lead until 2006. Sister Lorita Moffatt led the group for several years. “In meeting with the group, I always felt a deep faith and joy in those who came,” said Sister Lorita.

Liz, spiritual director and adjunct staff at Mercy Center who has led the group for three years, begins the meeting by playing a “Welcome Song.” Eyes closed, hands at rest, the dozen people settle in to the lyrics. Welcome to the circle. Do you need some company? Are you feeling weary? An attentive, prayerful quiet follows.

Liz asks the members to talk about why they are here. Bob Anderson came because his wife Barbara was diagnosed with uterine cancer and they both found sustenance in the group. Barbara died four months ago, but he continues to come.

Others briefly tell their stories. They are all familiar with the awkwardness of telling friends about their diagnosis and hearing the fumbling responses. Here there is instant understanding of chemo’s effects, of pressures on families, of the fear that descends with a diagnosis.

Michelle Hassler stands behind her chair. She looks vividly alive in the turquoise scarf wrapped around her head. “I’ve just had the 24th of 25 radiation treatments. My insides are irritated, so it hurts to sit down,” she said smiling. “In July 2012, I was diagnosed with uterine cancer, and I stumbled on the group. From the first I felt grateful.”

The group is ecumenical but deeply Christian. Margi Stone, diagnosed with stage four lung cancer three-and-a-half years ago, has found the group has changed the way she prays. “I wanted Jesus to come back into my life,” she said, “in a way I could relate to, a way I could live my life by, not just words in an historical sermon.”

Are they healed by prayer and this deep community? The answer isn’t simple. Adele Dunnigan talks about her trip to Lourdes years ago after five kinds of chemo for her 4th stage breast cancer. Her cancer then disappeared. But more often there is a different kind of healing.

“One of the things that happens,” says Liz, “is that they are clear about what is real. Dying is real. Do they not want to die? Of course they don’t, or they wouldn’t have treatment. Their attitude is, I want to live each day I’m given, as fully as I can. I want to be alive. It’s a process of coming to terms with fear and living.”

“It is a healing ministry,” said Liz, who finds this group to have the deepest impact on her of all she leads at Mercy Center. “It’s not magic. But healing does take place. People are spiritually, emotionally, physically healed.”