*For the protection of all, vaccinations and face coverings will be required. Please come prepared to show proof of vaccination.

Services will also be live-streamed on Zoom 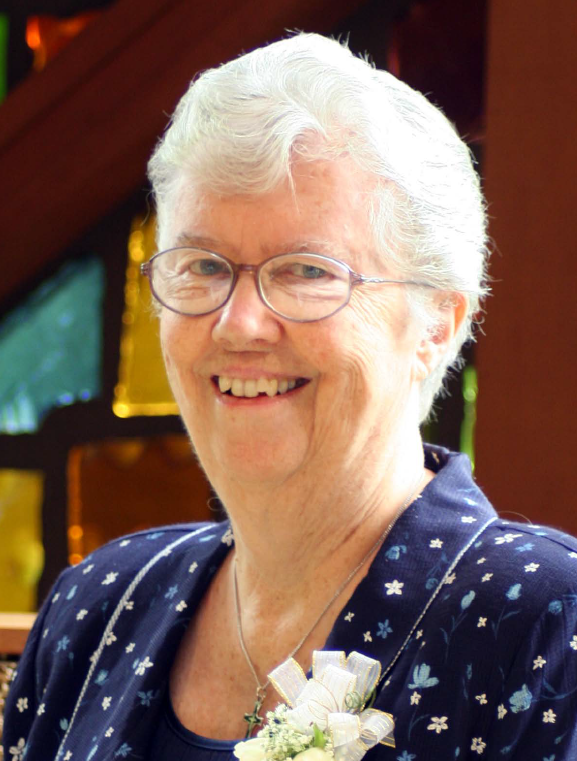 Sister Patricia Ryan died at the age of 90 on September 14 in Colma. Born in Oakland to John and Kathleen Gill Ryan, Patricia and her younger sister Jacquelyn grew up in Burlingame. Following her graduation from Mercy High School, she completed a BA at San Francisco College for Women, worked as a research chemist, then entered the Sisters of Mercy in Burlingame in 1955. She professed vows in 1957 and was given the religious name Sister Mary Gertrude.

She taught high school math, science, English, and religion in San Francisco, Burlingame and San Diego for 20 years and was honored to participate in a Shell Merit Fellowship at Stanford for High School Science Teachers in 1964. She earned an MS in Chemistry in 1968 from Seattle University.

Sister was early to raise awareness of environmental issues and modeled numerous ways to care for and honor earth from both a scientific and a spiritual perspective.

Sister Patricia served in community leadership as vice president then later as president, leading the community through times of transition. She also spent six years in parish ministry in San Bruno helping to form basic Christian Communities. During this time, she also served on the Archdiocesan Social Justice Committee and was part of a fact-finding mission to El Salvador.

In 1994 she became the first director of Mercy International Centre in Dublin establishing it as a welcoming place to all Mercy ministers and students seeking to honor and continue the work of the founding Sisters. She especially enjoyed being immersed in her Irish heritage.

A published poet, Sister Patricia taught others to use creative writing through a women’s writing group. She enjoyed playing the violin, especially for religious services and community celebrations. She also led retreats focused on contemplative prayer and eco-spirituality.

She is survived by her sister Jacqueline Curran, nieces Mary, Peggy, Anne, Kathy, Patty, Shelley, and Jenny, nephews John, Tom, and Tim, a large extended family, and her loving community of Sisters of Mercy.

Pat Ryan was a quiet but strong, steady light in our world – in all the arenas of her life.

The light of her love for this world, for this Earth, permeated her and radiated out.

Here at Mercy Center, she co-founded the Conscious Evolution group with Sr. Marguerite and Fr. Tom Hand in the early 2000’s.  When Tom and Marguerite gave up their leadership roles, I was blessed to share her Earth ministry for many years as co-facilitator of the group and co-leader of many Awakening the Dreamer presentations.

For over 12 years we dedicated ourselves to waking up through deep reflection and sharing,  using  books and articles, films, guest speakers, and our own lives.  Her poetry was always an anchor.

Pat’s efforts were never about her.  Her self-emptying life, strengthened by her meditation practice, and desire and commitment to live in the present moment, made room for Earth and Spirit to move through her.  She channeled the call for all of us to realize our Oneness with all Creation.  She was a model of the power of humility.  For all of us who shared this journey with her, her lived example called us to integrity.

Her heartfelt questions still invite us to our ongoing and ever more urgent quest.  Can we, even now, hear her whispering:

We remember her with much love, gratitude, and deep appreciation.

“Fully Alive”, ever human, joyful and accomplished was Pat Ryan. I saw it as she retired, saw it at 64A Baggot Street’s historical museum where she had placed so many items dear to the Foundress; including her ring. Poet she was.Out of her own retirement place, Marian Oaks room was a tree she portrayed in poetry. As a new entry I I recall our novice mistress’s saying about Sisters of Mercy, “If you need help, ask a busy person!” That was Patricia. God now ever love her!

I celebrate Pat as a most beloved cousin (along with Jackie), a faith-filled and totally committed woman religious, leader of eco-spirituality, prophetic woman of the Church. She has been an inspiration and role model for me as a Holy Names Sister, often welcomed by the Sisters of Mercy. My brother, Fr Michael Ryan, my twin sister, Janet and her husband, George Pasha III enjoyed many a family celebration with Pat, whose smile lit up our lives! Pray for us all til we meet for the Great Reunion dear Pat!